DIYChemicals is proud to be a small US company. Help support our 🇺🇸 business as we support you! Dismiss

34% Hydrogen Peroxide Uses: What You Need to Know

Chances are that you have seen hydrogen peroxide in the healthcare section of your local store, and you may already know about 34% Hydrogen Peroxide uses… it’s possible you even have some in your house already. 3% H2O2 It’s often used for preventing infections in minor burns, cuts, and scrapes. It also is used for rinsing out your mouth to help with removing mucus, and relieving minor irritations in the mouth such as those from cold sores and gingivitis. However, the type of hydrogen peroxide we’re talking about today is a much stronger version, with a 34% concentration available online on our website.

You can use 34% Hydrogen Peroxide in almost every industry. Because it’s extremely concentrated, you will need to dilute to a more manageable concentration first, like 3%. The benefit of buying 34% H2O2 versus 3% H2O2 is that you don’t pay for water-weight. Why would you pay $50+ for mostly water? Instead, 1 gallon of 34% H2O2 can be diluted to the equivalent of 11 gallons of 3% peroxide! The 34% H2O2 we sell finds common usages in cleaning, as a brightening agent for laundry, and as “liquid oxygen” in horticulture. 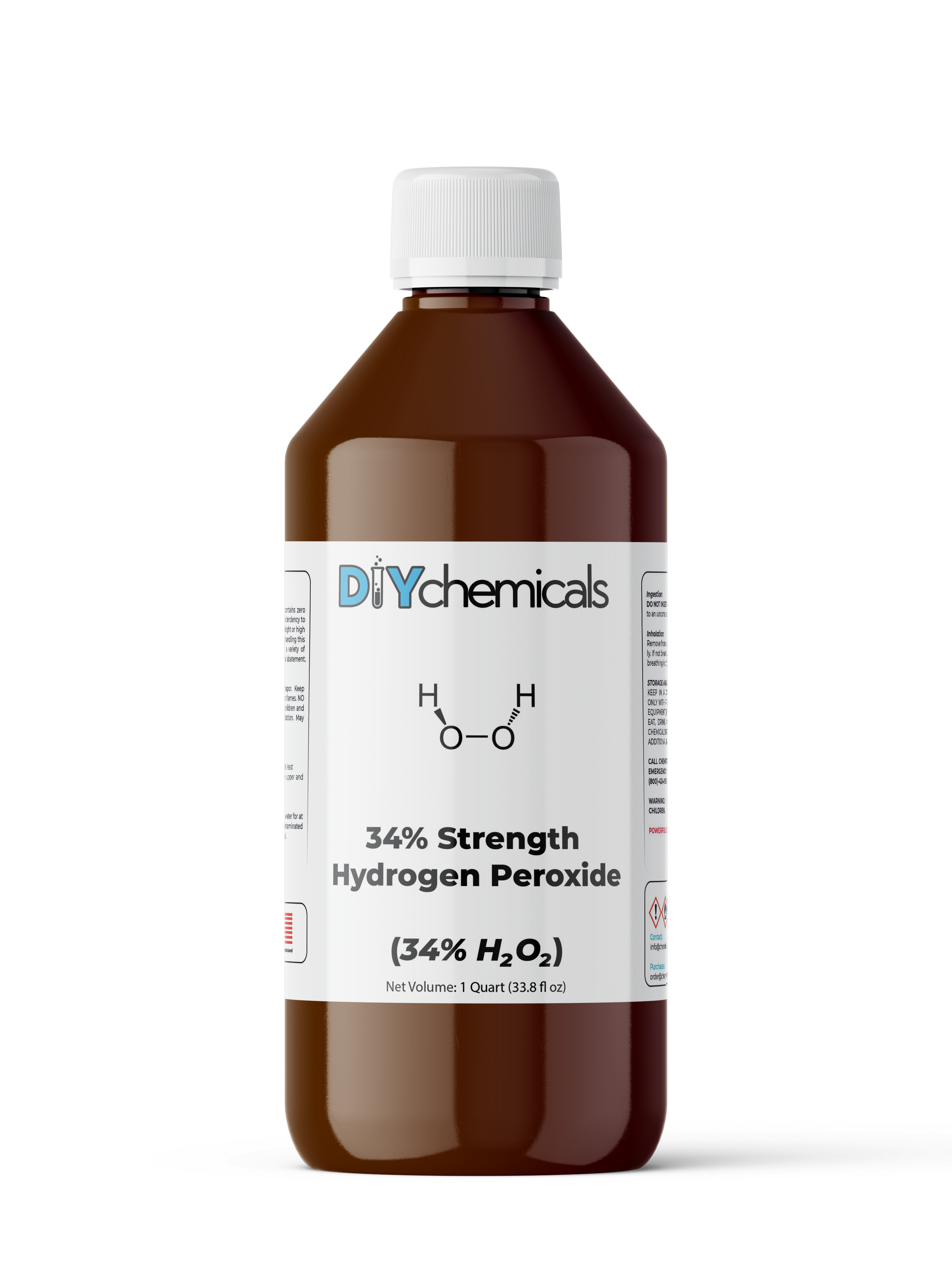 A single quart of 34% peroxide makes a little under 3 Gallons of 3% peroxide! Talk about a cost savings!

While cleaning, make sure to wear proper gloves, skin protection, and face + eye protection. Here are some of the things that diluted 34% H2O2 can be used for:

Self explanatory. Soak your toothbrush in diluted peroxide and then thoroughly rinse until all peroxide is washed away.

Add 2 ounces of it to soak the dishes (and then rinse) before adding to the dishwasher, to boost its cleaning ability. It can also help with removing baked-on food stains and grime from your dishes. Simply combine with baking soda and then scrub off.

Your dirty fridge harbors bacteria. However, it’s not a good idea to use heavy chemical cleaning products in it either – your food is in there! Instead, simply put some diluted hydrogen peroxide onto a rag, sponge, or paper towel and then use it for cleaning your fridge’s walls, shelves, and other surfaces in the fridge.

If you are struggling with mildew and mold, hydrogen peroxide is a wonderful anti-fungal. Simply dilute and pour it in an empty sprayer bottle, squirt it and then wipe it down. You can even keep it in your shower and quickly spray it down once per day.

If your grout lines are looking dingy, you can dip a toothbrush that you have sitting around into diluted hydrogen peroxide. Then use the toothbrush for whitening up your grout.

High-efficiency washing machines that are front loading often develop a musty odor. This will be due to mold and mildew that grows from excess residue from detergents and fabric softeners. Add 2 cups of diluted hydrogen peroxide to the empty drum of your washing machine. Then run a cycle of hot water. You should do this each month, particularly if you have humid weather. It’s also a lot less expensive when compared with buying a product specifically made for cleaning washing machines. 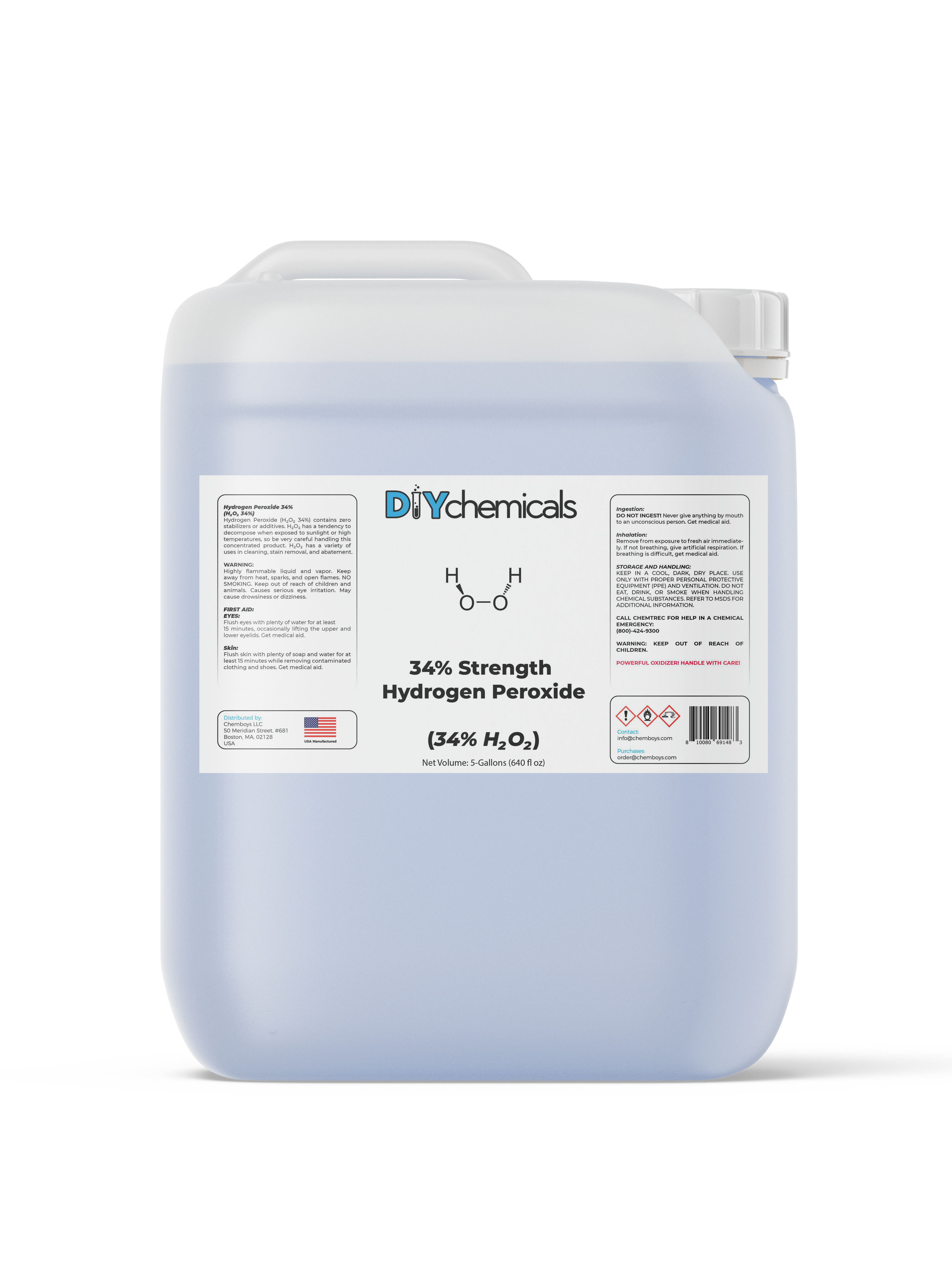 Keep away from sunlight and high temperatures. Store locked up! 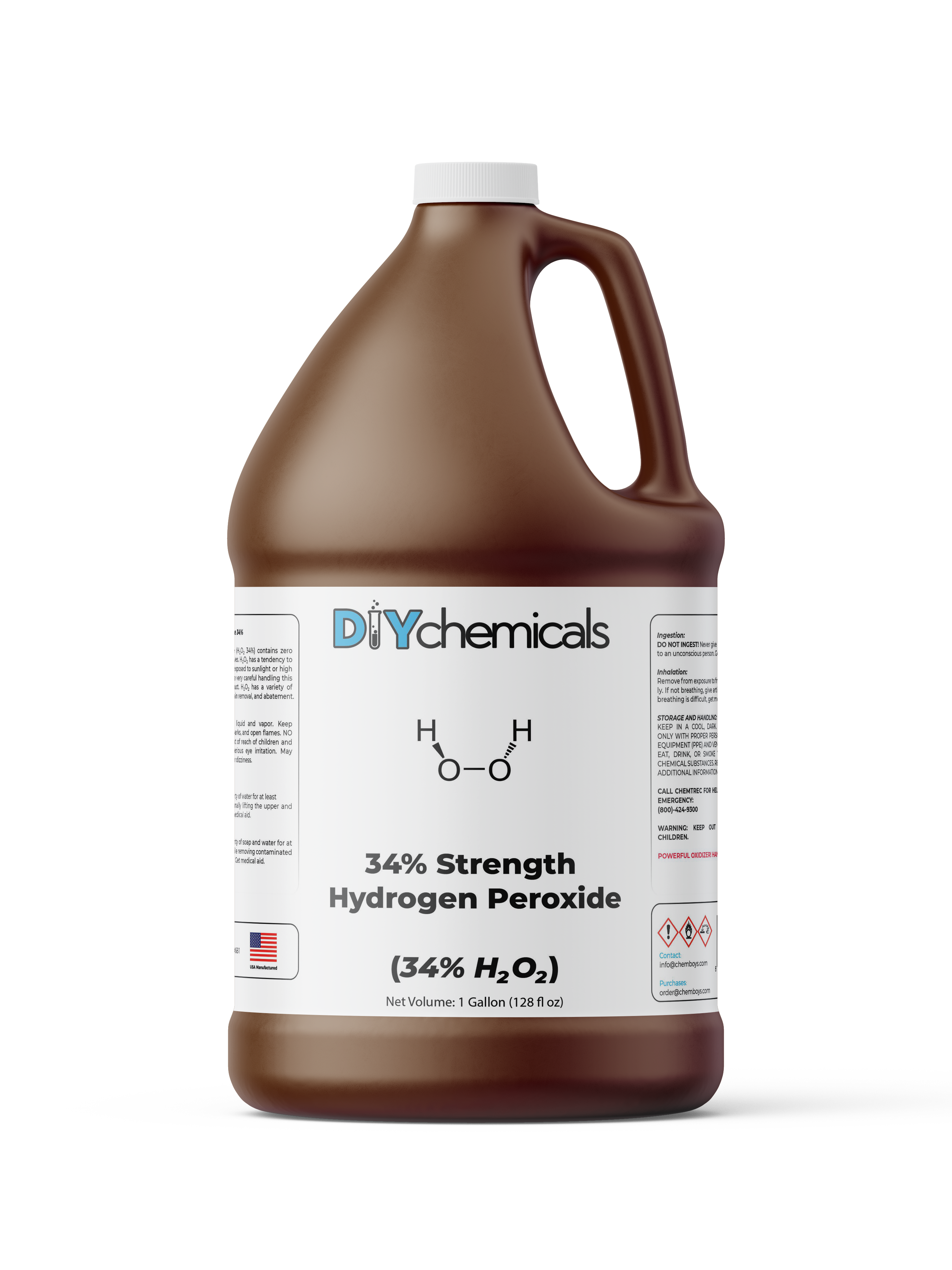 Available at our Storefront

As you can see, there are many 34% hydrogen peroxide uses within household, cleaning, and hydroponic systems. If you are looking for 34% hydrogen peroxide for sale, you can find right here at DIYChemicals.com in various quart, gallon, and 5-gallon sizes. If you are looking for Bulk sizes, visit our sister company Bulk Chemistry for 55 Gallon drum sizes and larger! Also, it’s important to note that hydrogen peroxide 34 percent is a lot stronger than what you can buy in your local store, so you must be careful handling – otherwise… you may get burned. In Hydrogen Peroxide’s pure and diluted forms, it’s very harmful to handle without proper equipment. You must exhibit caution and wear all proper safety and Personal Protection Equipment (PPE). Exhibit caution!